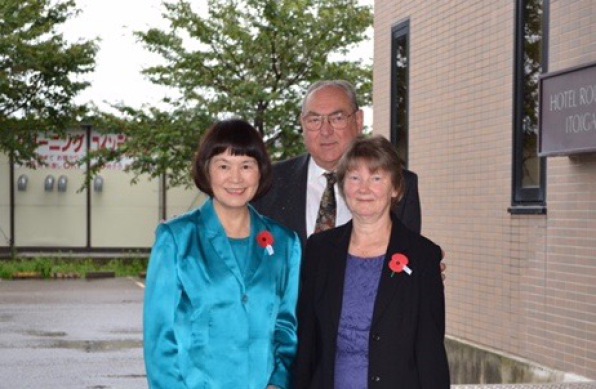 We first made contact with Keiko via the British Embassy in Tokyo in March 2010.  We had asked the Embassy if they knew of any way that we could visit Japan, and hopefully go to the site where Linda's father Arthur Jones was a POW.  Within a matter of weeks of making our initial contact, Keiko had incorporated us into the group that she was taking to Japan in October 2010.  Whilst in Japan, we visited a number of places where POWs were held all of which had a memorial for the POWs.  The final place was where Linda's father was held in Omi camp 13b, Niigata prefecture, but sadly no memorial.

It was during our visit that we decided that we would like to see a memorial in the area where the camp was located in honour of the sixty POWs who had died there (58 British and 2 American), and for those who survived and returned home to continue their lives,  like Linda's father.

It was early in 2014 that we heard that the company the POWs had worked for was willing to erect a memorial close to where the camp was located.  We then contacted Keiko and asked if she could do something to help us so that we could attend the unveiling.   As usual, she came back to us with a proposal which we very gratefully accepted. On 6th September 2014, we, and two sons of POWs also held at the same camp, attended the ceremony for the unveiling.  During the ceremony, speeches were made and it was Keiko who translated Kevin’s speech.

We are sure those family members who attended the unveiling along with us will agree that Keiko is a remarkable lady because without her this memorial may not have been achieved.   Since getting to know Keiko we have made a number of friends, both British and Japanese, and still keep in contact with most of them.  We cannot say how grateful we are for the help this lady has given us and many other POWs and their families.