The Story of Agape World Reconciliation 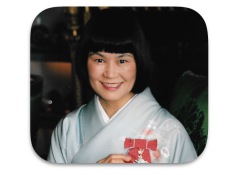 The Cross caught her eyes. It was placed in the middle of a memorial plate at the center of a grave in her small home town of Kiwa-Cho, duzzling in the bright sunlight.

Keiko marvelled at it. It was the summer of 1988. She was visiting family with her two young boys, soon after losing her husband in a tragic airplane accident.

The copper Cross was placed in honour of the sixteen British soldiers. They were the Far East Prisoners of War (FEPOWs), who died while working in the copper mine in a neighbouring village, called Iruka, during the second World War (WWII).

Inspired by the marvellously rebuilt memorial-grave and the Roll of Honour, Keiko decided to find the mothers of the sixteen soldiers who perished there and the fellow FEPOWs who survived and returned home. She simply wanted to show them the photographs and tell them that the memory of their sons and comrades is honoured and remembered in once an "enemy" country away from their own.

And this is how it all started. The story of Keiko C Holmes and Agape World Reconciliation. 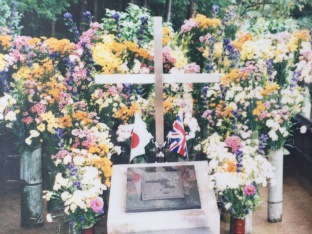 The Memorial Grave in Kiwa-Cho, the photograph taken by Keiko

Immediately, Keiko started to search for the local Japanese people who knew the FEPOWs in Kiwa-Cho and beyond. Finding out that her father’s driver worked in the copper mine when he was seventeen, she rushed out to find him.

"The FEPOWs and the local miners worked side by side, sharing the dangers and hunger together", recollected the former Iruka miner. He remembered a few FEPOWs by name and what they had told the miners about their jobs and families.

Iruka is in Kiwa-Cho. Conveniently, Keiko’s brother and his family live in Kumano City, along the Pacific Ocean coastline, which is about thirty minutes drive from Kiwa-Cho. There, at her brother's house, Keiko met a Japanese former soldier, who stationed in Thailand during the WWII. 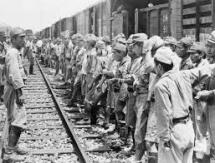 "He must have been a Christian."

The former soldier recounted and told Keiko: “Our task was to complete the Thai-Burma Railway sooner than expected. It was the order of the captain. We treated the POWs unfairly and drove them to work harder. Then came the day. Our circumstances changed completely - we, the Japanese Army, surrendered to the British Army.

Now under the British supervision, we engaged in exhuming corpses alongside the railway. We were afraid of being treated harsly by them. So, we hid our faces with our towels to avoid recognition as individuals.

One day, a British soldier called Andrew, came right up to me, took off my towel and looked me into the eyes. I froze. Contrary to my fear, he was kind and said,'Take your time, there’s no need to hurry.' I hear that there are many Christians in Britain. He must have been a Christian, that is why he could treat us in such an extraordinary manner. I am sure of it. I have long since forgotten every other British soldier’s name, but I will never forget Andrew.”

Keiko’s brother brought out and showed her an article in the local evening newspaper. It was about a memorial service which was held in the exact spot, where Keiko and her mother stood earlier in the afternoon, and saw the large orchid wreath. It was organised by the locals who worked in the Iruka mine. They were school aged children during the WWII. About twenty of them, now in their 60s, reminisced about the FEPOWs with whom they had exchanged language lessons. 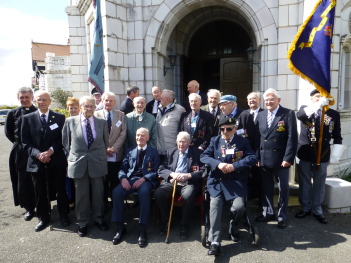 "This is not a place for you to come."

Back in the UK, after nearly a year of prayer, Keiko got to know an Iruka POW, Joe Cummings, who lived in Northumberland. Their correspondence started. Keiko travelled back and forth to Japan with Joe’s messages to the locals each year. She met and interviewed more people who were active during the war.

In 1991, Keiko was told by Joe about a FEPOW Conference in London. Against all the odds, she attended it.

"Go home!" unkind words were uttered. In the midst of the reunion of one thousand FEPOWs and their families, Keiko realised just how deep the wounds of the war, and how many people are still deeply affected.

God wants me to do something for them. There in the unfriendly atmosphere, Keiko sensed the God's call, to be a bridge over two nations, and of the love and power of God. She prayed earnestly that she might be useful to Him. 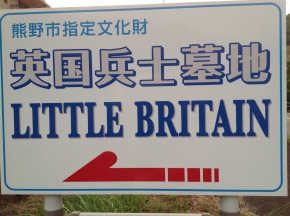 The signpost to the memorial -grave in Kiwa-Cho, in Kumano City, Mie-Ken

Each time Keiko visited Japan, she sought for, connected with and interviewed many interesting people. The outcome of those meetings was compiled in a booklet, called ‘Little Britain’, together with the FEPOWs’ essays. It was published in both Japanese and English languages in December 1991.

‘Little Britain’ softens the hearts of many FEPOWs’. And in October 1992, after many uphill struggles, Keiko took a group of twenty six former soldiers to Kiwa-Cho, the first Agape Pilgrimage of Reconciliation. Four years had past since Keiko first saw the Cross.

Not only all the places in Britain and Holland, but to United States and Canada, Australia and many parts of South East Asia, Keiko travelled to see each FEPOW and Civilian Internee, and their families for reconciliation work.

This resulted in that many of them visited to Japan each year since 1992 on the Agape Pilgrimages of Reconciliation. Helped by the positive media coverage, the Japanese enterprises started offering financial support. So did the Japanese government from 1996. Most of the financial support ceased in 2006.

Agape World have brought over five hundred people in total from different countries to Japan on the Pilgrimages of Reconciliation. We are continuing on a smaller scale.

There are many testimonies of personal journies: from pain and sorrow of the past hurt and hate to acknowledgement and acceptance, leading to forgiveness, reconciliation and emotional healing. There have been amazing stories of physical healing, too. Agape World hopes to reach out the younger generation with this message of reconciliation, rooted firmly in the love and power of God. 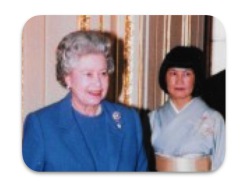 Photograph: In 1998, Keiko was conferred OBE by Her Majesty Queen Elizabeth II

1996 Given the Japan Society Award for her work in Anglo-Japanese Reconciliation.

1998 Conferred OBE by HM Queen Elizabeth II in recognition of her work in fostering Anglo-Japanese Reconciliation.

1999 Given the Foreign Ministry Award by the Japanese Government.

2000 Given the title of Companion of the Cross of Nails by the Coventry Cathedral on 18th August.

2018  Given the Order of the Rising Sun, Gold and Silver Rays by the Japanese Emperor.

There is now a brand new Japanese Section with blog posts. Please visit from here.