the story of Helen Haynes of Darbyshire

Posted on 6th December 2021; The original article by Kenichi Ogata, former Bureau Chief of the Yomiuri Shimbun, was published on August 20, 2021. The translation by his colleague, Lucy Sawa, was edited by HUMc. 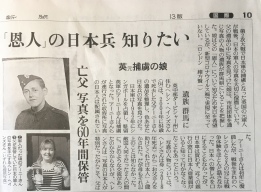 Who is this soldier? - An old photo kept by Dad for 60 years old

An old faded photograph of an unknown Japanese soldier was hidden amongst the belongings of a former British soldier.

It caught the eyes of Helen Haynes (photo above, center with daughter, Tali) whilst she was sorting through her deceased father's belongings in the attic. Helen's father Ernie passed away in 2004 at the age of 84.

He was a Prisoner of War (POW) by the Japanese army during the Second World War. But only little of his wartime ordeal was known to his family. The only clues were the name "Tobe" and the address in Gunma prefecture in Japan, written in Roman letters on the back of the old photo.

All that Helen's mother could tell her children was that the person in the photograph was ‘a Japanese man who helped your father’. Nothing more. She passed away in 2018.

So it is left to Helen to ponder what went on between these two soldiers of enemy countries.  But Dad wouldn’t have kept the photograph for over 60 years if the man in the photograph hadn’t been a ‘very special person. "I want to know more about this man!", exclaimed Helen. 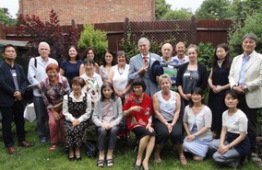 From 2019 Paradise Lunch of Agape World, Helen is third one from right in front row

When Japan invaded Singapore in 1942, Ernie and other British soldiers, who had been deployed to Singapore, were all captured and held as POWs. There, he met Mr. Tobe, the Japanese soldier in the photo.

Ernest was repatriated in 1946. He hardly spoke to Helen and her two brothers of his wartime experiences. Nor did he express bitterness towards Japan, however, Helen recalls that he never bought a Japanese car and that he stopped going to a certain bank when he learnt that there was a Japanese teller behind the counter.

Helen's search for the Tobe family was fruitful. It brought many new encounters with "like-minded people" explains Helen as she contacted Keiko Holmes, the UK-based founder of Agape World in 2018.

Through Keiko's effort in contacting the Gunma prefectural office via a friend, the connection is sought with the Tobe family, the descendants of the Japanese soldier in the photo. Although the soldier himself passed away a while ago. 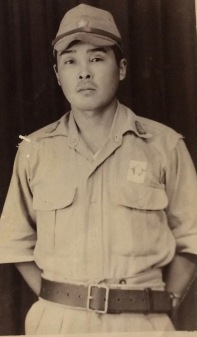 The photograph Helen's father kept for over 60 years

"Incredibly happy", the eldest son of Mr. Tobe felt honored at the news that Ernie had treasured the photograph of his father all this time, according to Keiko,

With the support of Keiko and others, Helen made plans to visit her father's memory lane and to meet the Tobe Family in Japan in the autumn of 2020. Although the plans have been put on hold due to the travel restrictions, Helen's desires burn.

"I want to ask his family what kind of person this Japanese man, who was so precious to my father, was,' says Helen. 'Many English soldiers perished in the prison camp. I believe that Mr. Tobe helped keep my father to stay alive. I want to express my thanks.'

Edited and posted by HUMc on 6th December 2021

The non-edited version of the translation can be downloaded below:-.