who is now a great-great-grandgrandfather 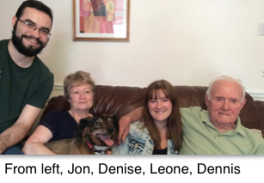 Keiko was one of the five key speakers of the Online Talk, hosted by the Embassy of Japan on the 18th September, 2020. She introduced a 100 years-old, Kobe POW, Dennis Morley, who is now a great-great-grandfather to the baby girl, born to his great-grand-daughter Leone and her husband Jon.

Keiko expressed her wish to re-schedule our Pilgrimage of Reconciliation as soon as it is possible and safe. It had to be cancelled this Autumn due to the pandemic. More than five hundred POWs and thier families in total visited Japan with Agape World.

Dennis had an overwhelming expereince, visiting the "Kobe House" where he was held as a prisoner of war (POW), amongst other cities and key locations in 2007. His daughter Denise and Leone, who then was a teenager accompanied him. The baby girl was named Lunar Esther, for she was born in the full moon night. There is exactly a 100 year age difference.

"Today, I feel no hate towards the Japanese people," exclaimed Dennis. "We must all make a better world with love, peace and friendship, all of which I felt on this trip", he continued, recalling the warm welcome that he received in Japan.

Dennis had his 88th birthday in Japan and was “treated like a lord” in his words. He thanked Keiko repeatedly. 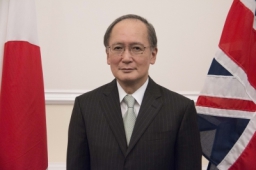 Ambassador Yasumasa NAGAMINE, Photograph: from the website of Embassy of Japan

Freedom, Democracy, Respoect of Human Rights and the Rule of Law

are our shared values

In his closing remarks, H.E. Ambassador Yasumasa Nagamine stressed that the UK and Japan are now “global strategic partners sharing a set of core values including freedom, democracy, respect of human rights and the rule of law.

Our deep-rooted partnership looks set to flourish still further, buoyed by the mutual respect that our two countries have come to enjoy.”