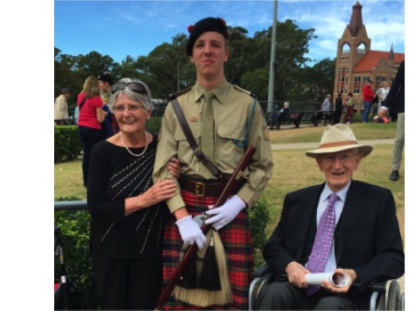 by John and Joan Craig

Message from an ‘Iruka Boy’

My name is John Craig, now aged 94.  I joined the Royal Corps of Signals  in 1941. Shortly afterwards found myself a P.O.W. in Singapore.

Following about 6 months working on the docks, loading and unloading Ships, I was one of hundreds of POWs who worked on  the infamous  Burma Railway. Conditions there were very harsh, with many of my colleagues dying through the many tropical diseases and lack of food.

I well remember my 21st birthday, which was spent following an elephant pulling heavy logs used in the building of the railway.  It was monsoon time and the elephants heavy feet made deep holes in the gritty mud, so my shoeless feet went into the holes as well, which meant my feet and legs became very chafed.

Once the railway was completed, I  became one of 300 Prisoners, who were sent to Iruka a small village in Japan to work in a Copper Mine.   As far as I know, I was the youngest  POW.  there. We were divided into 2 groups, one doing the day shift, the other, the night shift. On the 4th Thursday of each month, we were all in the camp together as we changed shifts. This gave the Guards the opportunity to weigh the whole camp members, and if the overall weight had  increased, the rice ration was decreased. While working at the Mine, 16 men died, either as a result of the Railway, or from accidents in the Mine, so at the end of the War 284  men returned to Britain.

Older children in the Village had worked alongside us, and friendships were formed. In the early 1990's  it was discovered that those children, now adults,  had built a Memorial to those 16 young men. Keiko Holmes., who was from this area, had married an Englishman and gone to live in England.  After her husband’s tragic death, she visited Japan, and, finding the beautiful memorial, decided to try and find any of the 284, to tell them about the Memorial to their comrades.

I heard about her effort, when visiting Singapore for the 50th Anniversary of its 'fall.  My wife Joan and I were  able to participate in 2 of the early Pilgrimages that were arranged by Agape World, and financed by sympathetic Japanese people, it was such a joy to meet up with fellow colleagues and be shown such kindness from the villagers of Iruka (now called Kiwa-Cho). Many of the  ex POWs  I met returning to Japan, had previously only hatred in their hearts for Japanese people, It softened by the kindness we received.  I am so grateful to Keiko and her co workers for their tireless work of reconciliation through Agape World.

(John and Joan Craig have emigrated to Australia)