Former Japanese Ambassador to the UK

It is my pleasure and honour to contribute this article to Agape’s website to pay personal respect to the significant activities of Keiko Holmes for Japan-UK friendship.

Keiko Holmes of Agape is a synonym for  reconciliation between Japan and the United Kingdom. Back in the 1990s Japanese in the UK were faced with a surge of emotion arising from the pains caused by the Imperial Army's gross mistreatment of the tens of thousands of British and other prisoners of war and civilian internees held during World War II in the Asia-Pacific theatre. It was an awakening to many Japanese, including us in the Embassy, for we had thought that as the War ended five decades ago with a peace treaty, everything had already been settled alas, no, it  had  not.  At least, not in the minds of those who suffered. Many Japanese simply did not know, and probably did not want to know, because we felt, rather complacently, we, too, had suffered.  We were at a loss about what to do. Attempts were made simply to dismiss the expression of anger and frustration of the victims, which only made things worse. Then we heard about Keiko, who had been organising reconciliation pilgrimages for former POWs forced to work in the mines during the War in her home town of Kiwa-Cho in Central Japan of Mie Prefecture, and through her faith had initiated the process of reconciliation. Even in the Embassy few knew much about what reconciliation meant, much less how to pursue it, but we came to be enlightened and inspired by her and her work. Through her we came to know how war wounds cannot be healed by one act or event but only through a long, difficult, still ongoing process of healing conflicting emotions in the minds of all those involved. Above all, she showed the importance of contrition with humble admission of past mistakes, which could only be reciprocated by forgiveness on the part of the victims, thus embracing everyone together with friendship. Keiko was a pioneer and still is a most visible practitioner of reconciliation work. Her Majesty the Queen recognised her work by awarding her an OBE in 1998 while the Japanese Government showed its deep appreciation for her long dedication to a great cause by presenting her with the Foreign Minister’s Commendation the following year. 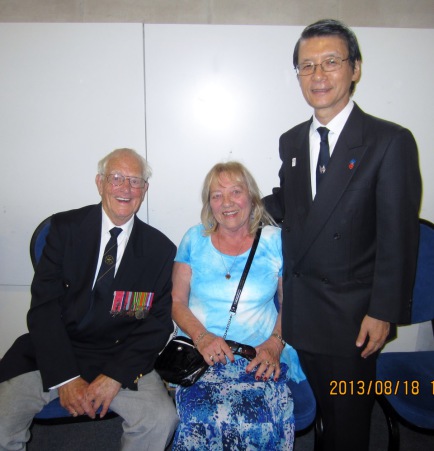